They say they only constant in life is change. I’m grateful for the ways that Lakeshore Surgical Center, Dr. Greene, and the committed staff there helped to bring about wonderful changes in my life.

When I was 29 I had just given birth to my fourth daughter, who came as a complete surprise. I had been trying for years to work through strains in my marriage and decided that it would likely be best to have my tubes tied since my last pregnancy was so unplanned, and so I could focus on my children and marriage.

Change came in heartbreaking ways though and sadly, that marriage ended in divorce several years later. Time passed and life moved forward. Eventually I met a wonderful man, who I married, who had never had any biological children of his own. He understood I would likely never be able to have more children when we married. However, I knew that trying to have a child together was a gift I at least wanted to try to give him. So we began to discuss our options.

Being in my late 30’s I was worried about being able to get pregnant at my age. However, we decided to weigh our options between fertility treatment and tubal reversal. I had watched a friend go through IVF and she still was unable to conceive. So much time, energy, emotion, and expense was put into it. Watching her experience caused me to decide to opt for tubal reversal. Financially it was less expensive and it seemed like an option that wasn’t forcing anything, but rather opening a pathway to possibility. In my husband’s words, let’s just make the effort to open that door and if it’s meant to happen, it will happen.

When we met with Dr. Greene he was very optimistic that I would be able to conceive. The surgery went well and the support and aftercare continued long after I had my post-op appointment and went home. As the months passed there was a nag of worry in the back of my mind that perhaps the surgery didn’t take and I wouldn’t conceive. However, just as I was setting up appointments with a fertility specialist to have a follow-up dye test done to make sure my tubes hadn’t scarred during healing, I found out I was pregnant! 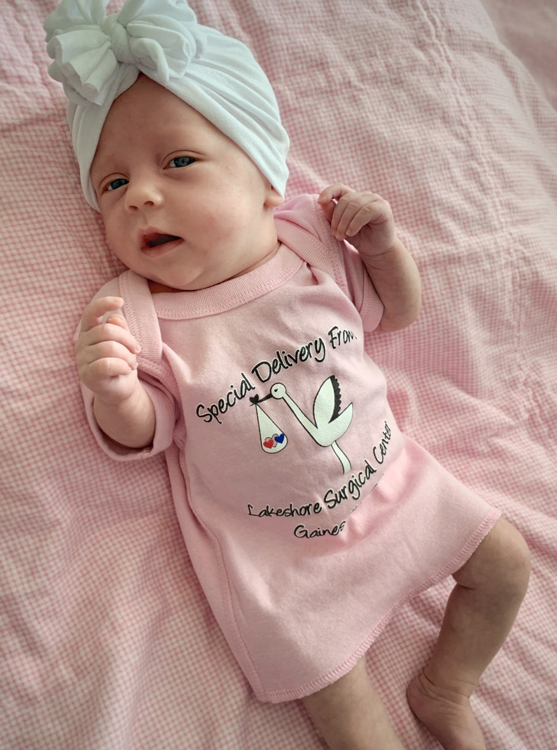 (Her big sisters were thrilled we were welcoming a fifth girl into our family!) We look at her now and can’t imagine a life without her in it, and seeing her and her Daddy together make all the sacrifice to bring her here worth it.

I’m so thankful for the reassurance Dr. Greene was able to provide that having a baby at my age was absolutely a possibility. We feel so blessed that his expertise was able to quiet doubts and make Piper being a part of our lives a reality. We can’t thank the Lakeshore Surgical team enough for helping to change our lives in such a wonderful way and help give us such a blessing!

Age at Time of Reversal: 38